Oh, yes…we’ve spoken about the unique and truly magnificent Serena Williams before. We have been thrilled at her unbeatable determination, and we have been awe-inspired by her ability to ‘knock it’ over that net with a supernatural power that I’ve only seen matched by Thor’s mighty hammer. But watching Wimbledon this past weekend, and seeing that woman who has inspired, empowered and thrilled fans all across the globe come back and do it YET AGAIN, was breathtaking. This is one of those moments that you remember forever. This is one of those matches that should go on any and all highlight reels because, frankly, the best woman most assuredly won! 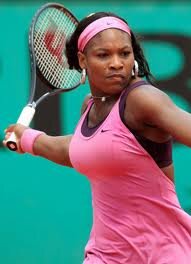 Thirty-years-old, Serena has been through some major health issues; she even made the world think for a short while that she was basically retired from tennis, because she just didn’t have the energy to do it anymore. Yet, Serena appeared on that court and won her FIFTH Wimbledon title this past weekend in only three sets. Just shows that you should never ‘assume’ anything. Agnieszka Radwanska of Poland certainly looked a bit depressed, but even she would have to admit that Williams deserved the ultimate prize on hard work alone.

Serena was all smiles when reporters asked her how she felt. Basically she said that it was “an unbelievable journey,” which is most definitely true. After her Fourth win at Wimbledon in 2010, Serena was looking very much ‘over.’ Her health, her physical brawn – everything she’d built her career on was falling apart for health reasons. So to have Serena not only back on the court this weekend as somewhat of an “underdog,” but to also see her triumph over so much pain and adversity to show the world that she is most definitely NOT part of tennis’s ‘past,’ was extraordinary.

Of course, she ran to the net and made sure to smile and shake hands with her opponent, but then Serena went to the group of people she has relied on since day one – a group that fans and viewers already know to be one of the ‘closest’ families in the sports world. Serena’s father and mother were so proud that you could basically see their glow from a mile away. And then…her sister.

Over the years Venus has been her opponent, friend, confidant, sister, partner, fighter, defender, protector and – most importantly – her absolute best friend. Venus looked beyond thrilled that she was hugging the Wimbledon winner and extremely ‘okay’ with the fact that it was her beloved sister.

Now, was the match a foregone conclusion? No. This wasn’t one of those moments like Montana in football who just sort of threw for eighty points in the first half and fans basically changed the channel because it wasn’t a big shock as to who would end up winning the game. When Serena first began this quest for the title on Saturday, she didn’t exactly look her best. Of course, her opponent didn’t look all that great either. In fact, Radwanska was running all over the court trying to keep up with Serena’s skill and powerful lobs, and all she really looked like she wanted to do was go back to the hotel and go to sleep. Radwanska was not only appearing in her very first Grand Slam final, but she was also sick. Apparently she had a respiratory problem and was coughing and hacking all over the place during the actual match.

As time moved forward and the second set came into being, both players did much better – although Serena had the skill and, more likely, the past that showed she could stand up and fight for a Wimbledon championship. Radwanska certainly gets an ‘A for effort,’ but watching Serena serve, volley and work her behind off was outstanding!

We are talking about a person who recovered from a life-threatening pulmonary embolism, and witnessing the power that seemed to come over Serena as the game went on was like seeing some entity infuse her with the ‘old’ Serena courage and willpower that all of us believed to be gone. With this win, Serena has grasped her 14th major championship, and become the first woman in her 30’s to win a Grand Slam title since Martina Navratilova did it in 1990.

Serena was very honest over the past couple of years when she talked about the foot surgeries, as well as the hideous illness that struck her down at such a young age. When she spoke with ESPN on Saturday, she made the soulful remark that: “At one point I just wanted to live; I wasn’t even thinking about playing tennis.” We are all so thankful that Serena was able to achieve far more than just breathing. In fact, when you look back on the world of tennis and try to find those elusive moments of greatness, names like Agassi and Connors and the ‘bad boy’ McEnroe, who will never be far from our imaginations, are truly made better by having Serena Williams be a part of their ‘elite’ list. This is a tennis player that not only proved on Saturday that you can continue to be brilliant on that court, but she also proved to the world that you definitely should…NEVER SAY DIE!

And one of the most ‘fun’ pieces of information that you all should know about? Only nine hours after Serena proved to the world that she was among the ‘elite,’ she and her sister, Venus, came back out and won their FIFTH Wimbledon doubles title. Oh, yeah! These siblings have some kind of superpower DNA strand running through their veins, if you ask this fan. This was their first tournament played together in two years, and they really only entered as a way to ‘warm-up’ for the Summer Olympics, where they are entering as the two-time defending gold medalists. But do you really even need to watch the Olympics? I mean, come on, after this truly enchanting performance the ONLY tennis players that should have those gold medals placed around their necks share the last name of Williams!

Congratulations, Serena and Venus! You are inspirations to us all!