When fans last saw Dave Robicheaux in Burke’s novel, The Glass Rainbow, the fate of he and his cohort, Clete Purcel, was up in the air. Thankfully…these are hard men to kill. 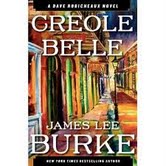 Dave is recovering in an ER in New Orleans from the shootout that took place in his neighborhood. He’s hooked up to a morphine drip which is completely messing up his mind and he’s not really sure what’s going on most of the time. Dave regales his friends and family with a story of how he received a visit in the middle of the night from a singer, Tee Jolie Melton, who gave him a gift of an iPod with some of her songs on it. Everyone thinks Dave has imagined this visit. Even though the iPod is there, no one else can find the songs he says are on the machine. Dismissing the incident as simply a side effect from the morphine, life goes on.

Soon Dave gets well and heads back to the job, once again serving as Sheriff of New Iberia Parish. The first mystery that comes across his desk is a strange disappearance. It seems that a singer, Tee Jolie, has gone missing along with her sister, Blue. When Dave and Clete discover that Blue has been found dead inside a block of ice in the Gulf of Mexico, things get even odder. Blue was the apparent victim of a drug overdose, yet she is found with a cryptic note that says her sister is still very much alive.

Characters and suspects come out of the woodwork with the author introducing everyone from members of the mob to a concentration camp survivor to a new contract killer that Clete seems to think is his illegitimate daughter. This makes for an extremely involved plot that covers an oil spill in the Gulf, art fraud, and the Nazis you love to hate. If you can keep up with the characters and pace, this is one of the best reads of 2012. Enjoy!