Red disks, hand stencils and club-shaped drawings lining the walls of several Stone Age caves in Spain were painted so long ago that Neandertals might have been their makers, say researchers armed with a high-powered method for dating ancient stone.

Scientists have struggled for more than a century to determine the ages of Europe’s striking Stone Age cave paintings. A new rock-dating technique, which uses bits of mineralized stone to estimate minimum and maximum ages of ancient paintings, finds that European cave art started earlier than researchers have assumed — at least 40,800 years ago, say archaeologist Alistair Pike of the University of Bristol in England and his colleagues.

Pike’s team presents its findings in the June 15 Science. 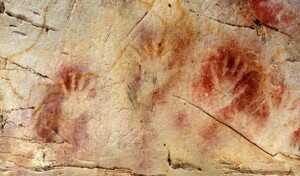 Previous age estimates were based on stylistic comparisons of drawings in different caves and radiocarbon dates for ancient pigments containing charcoal or other organic material. That research indicated that people began creating cave paintings in Europe possibly 36,000 years ago. Some researchers suspect thatHomo sapiens made rapid advances in symbolic thinking around that time.

New evidence of European cave art’s early origin fits a scenario in which wall drawings and other symbolic behaviors extend far back in the Stone Age (SN: 8/13/11, p. 22). People may have begun cave painting either before or shortly after entering Europe as early as 45,000 years ago (SN Online: 11/2/11), Pike suggests. Or perhaps Neandertals that already inhabited Europe drew on cave walls before their evolutionary cousins arrived, he says.

“If cave painting started before the arrival of modern humans, it would mean that hand stencils on cave walls are outlines of Neandertals’ hands,” Pike says. “We will need to date more examples to see if this is the case.”

Neandertals died out around 30,000 years ago. Many cave paintings in the new study date to no more than 21,000 years ago, clearly marking them as creations of H. sapiens.

Only small pigment scrapings have been radiocarbon dated to reduce damage to Stone Age artworks. Such tiny samples magnify the distorting effects of contamination on radiocarbon age estimates. Scientists also can’t be sure that charcoal in ancient pigments isn’t considerably older than the rock art being dated.

For the new study, Pike’s team employed a technique called uranium-series dating to analyze thin mineral deposits that had formed over or under parts of 50 paintings and engravings in 11 Spanish caves. Uranium incorporated into the minerals at the time of formation decays into a form of radioactive thorium at a known rate, allowing researchers to calculate its age.

Uranium-series technology “is certainly our only hope at present for dating engravings and inorganic pigments,” says Paul Bahn, an independent archaeologist and cave-art investigator in Hull, England.

“Neandertals were capable of producing cave art, and these new dates make it probable that cave art does go back to the Neandertal period,” Bahn holds.

Data from Pike’s team show that cave art in Europe was created over a longer period than previously assumed, comments archaeologist Daniel Richter of the University of Bayreuth, Germany, a specialist in dating methods. Richter suspects that modern humans crafted these earliest cave paintings, because no evidence exists that Neandertals were involved.

Two dating studies at a German cave, one led by Richter and another by archaeologist Thomas Higham of the University of Oxford in England, place painted shapes, bone figurines and other artifacts often associated with modern humans at about 42,500 years ago. Those studies employed radiocarbon dating and a method to estimate the time since artifacts were exposed to a Stone Age fire, but not uranium-series dating.

“I think it is far more likely that all of the art at European sites was made by modern humans, although it’s possible that a Neandertal hand was involved,” Higham says.

Pike’s team identified Europe’s oldest known wall painting at El Castillo cave, where several chambers contain more than 100 illustrations. One of several large red disks dates to at least 40,800 years ago. A nearby hand stencil was made at least 37,300 years ago, the researchers say; dozens of other disks and hand stencils on the same wall probably come from the same period.

Artistic activity at El Castillo continued for nearly 20,000 years. A red disk in another chamber was painted between 36,000 and 34,100 years ago, and a black outline of an animal dates to at least 22,600 years ago.

A club-shaped symbol in a decorated chamber at Altamira cave dates to at least 35,600 years ago, about 10,000 years before previous estimates of when painting started at the site. Dates for other Altamira drawings suggest that the cave hosted ancient illustrators over a span of more than 20,000 years.