The CEO of one of the world’s most popular social networks has apparently joined a high-end, consumer-focused image-sharing website and rival to Pinterest, and this seemingly innocent news has led to some speculation that his involvement may run deeper than just being another user of the service. 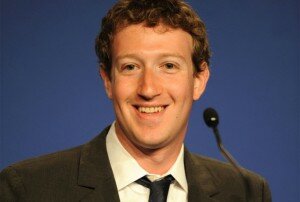 The webpage in question, The Fancy, describes itself as “part store, blog, magazine and wishlist,” as well as “a place to discover great stuff, to curate a collection of things you love, to get updates on your favorite brands and stores and to share your discoveries.”

On Friday, eagle-eyed reporters and websurfers using the service spotted a verified account belonging to none other than Mark Zuckerberg, the co-founder of Facebook. As of Saturday evening, one image had been added to his account — an Italian-made Extendo Library Shelving System — and more than 102,000 Fancy members were following the account.

“This got us wondering: is Zuckerberg interested in more than collecting images of things he likes? The last time he joined a social network site like this it was Instagram, which Facebook is in the process of acquiring for $1 billion,” CNET‘s Donna Tam wrote Friday evening.

“You might not think Zuck’s mere registration for a website means much… But you just can never tell if he’s interested in buying a shelving system, or the entire company,” added Austin Carr of Fast Company. “The last Jack Dorsey-backed startup Zuck took an interest in was Instagram, which his company is in the process of acquiring for $1 billion.”

Tam spoke with a Facebook representative, who could not confirm whether or not the account actually belonged to Zuckerberg, though Carr pointed out that the 16 people the “Zuckd” account currently follows include Dave Morin, founder of the social network Path, and Spotify CEO Daniel Ek. The Fancy was co-founded by Dorsey and Chris Hughes, another Facebook co-founder, and currently boasts nearly one million users.

Of course, if it is Zuckerberg, his motives for joining the network and the item currently being watched by its owner could be completely innocent. Just to cover his bases, Carr said, “Sorry if we spoiled the post-Honeymoon homecoming gift, Priscilla.”