Facebook’s new App Center is now up and running on a number of iPhones, which the social network says are being used as a trial for its store. 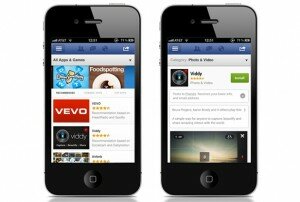 “Since we announced the App Center to developers last month, we’ve been testing it with a small percentage of users. We have no further details to share at this time,” a Facebook spokesperson said on Thursday after TechCrunch published several screenshots of the service running on iPhones.

The screenshots show the App Center having a similar look and feel to Facebook’s current iPhone application, with a black side bar on the left side of the screen that lists apps that have been downloaded, and a link to the App Center itself.

Apps with notifications are pushed to the top of the sidebar.

The App Center has two sections — top apps, which are the most popular as determined by Facebook, and social picks, with apps shown with star ratings and the names of friends who have downloaded the app.

Clicking an app takes the user to a dedicated page describing what friends use it and what it does, along with screenshots.  Users can also click through to see photos of all their friends who use the app.

These personalized features seem to be the strongest part of Facebook’s App Center, and what differentiates it from Apple’s and Google’s marketplaces.  On those app stores, users rely upon editors and the wisdom of the crowd, compared with Facebook’s App Center, where suggestions are based on people users personally know and, presumably, trust.

The App Center is believed to be just days away from its official launch, according to a Business Insider report citing a source briefed by Facebook.

The social networking company held an “Apps and Drinks” press event on Thursday to meet with developers, something that may suggest an App Center launch is close at hand.

Facebook first announced the App Center in early May, saying at the time that the new service would launch within the next few weeks.