Johnny Tapia…this is not a new name – and it is certainly a name that has been plagued by some extremely ominous and eerie issues throughout his lifetime. The ominous is now over, because yesterday in his Albuquerque, New Mexico home, Johnny was found dead. 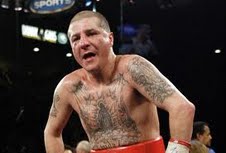 I know there are some out there who are not fans of the boxing realm who may not know who Tapia is, or why this is such a macabre story. But, you see, this is a man who has actually been declared dead four times during his life.

Johnny had a more than difficult childhood, losing his father – who was murdered – while his mother was pregnant with him. When he was eight, Johnny’s mother was brutally, horrifically killed, and Johnny was actually awakened by her screams, watching her chained to the back of a pickup truck and being carried away. Boxing would be Tapia’s salvation which he turned to at the age of nine.

In 1988, Johnny’s professional career began when he faced down Effren Chavez. After four rounds, the fight was called a draw. In 1988, he won eight fights – five by knockout; and in 1989, he won seven more, including a first round knockout and an eighth-round decision against some fairly big names.

The names kept on coming in 1990, a series that won Johnny the United States Junior Bantamweight title. It was at the end of 1990 that Tapia had become a well-known boxer, appearing more and more often in magazine and newspaper articles. And just as life was all good, he was suspended from the sport for the next three-and-a-half years for testing positive for cocaine.

In 1994, Johnny returned and beat boxer, Jaime Olivera, by knockout in four rounds, and kept racking up the knockouts one right after the other and regaining the NABF Jr. Bantamweight title. Albuquerque Police then claimed they found cocaine in Tapia’s possession five days after the fight – but instead of history repeating itself, the charges were eventually dropped.

Johnny won the WBO Super Flyweight title when he beat Henry Martinez, and went on to remain undefeated. In 1996, after six more fights, he kept his record and title and got locked in a rivalry with IBF champion, Danny Romero. Romero’s father had actually trained both boxers and when Tapia left, it was not an amiable parting. The rumor abounded that Tapia and Romero were members of rival gangs.

It wasn’t until 1999 that Johnny suffered his very first loss in a 48-bout career to Paulie Ayala. Various publications called it “The Fight of the Year.” And later that year, perhaps because he found himself on the losing end for the first time in the world of boxing, Tapia tried to commit suicide by drug overdose.

He came back…again…and went to regain the WBO title. The result was, Johnny became a two-time world bantamweight champion, but after he defended his belt against Javier Torres, a rematch with Ayala led to Ayala taking it from Johnny once again. Eventually Johnny would become a world title holder in three different divisions, and would look at a future of comebacks, losses, and massive depression.

At the age of 38, Tapia stood in the ring with a completely unknown fighter, Sandro Marcos, and in only the second round Marcos threw a left hook to the body and Johnny fell to the canvas.

Yes, the background was hideous, the childhood frightening, the drug problems a large part of life – but Johnny was one of the elite fighters to come out of the late 1990s. Perhaps he will never be known for his fighting, however, or his stellar comebacks and hard work to regain what he’d once owned, because his life story was far more difficult and strange than anything he would ever show the American people in the ring.

In 2010, he released his autobiography titled, “Mi Vida Loca,” and the introduction blew people’s minds.

My name is Johnny Lee Tapia. I was born on Friday the 13th. …To this day I don’t know if that makes me lucky or unlucky. When I was eight I saw my mother murdered. I never knew my father. He was murdered before I was born. I was raised as a pit bull. Raised to fight to the death. Four times I was declared dead. Four times they wanted to pull life support. And many more times I came close to dying.

…Yesterday the final ‘call’ was made when the Albuquerque, N.M., police department found Johnny’s body. Apparently the circumstances were not suspicious and the cause of death will be forthcoming.

Any boxing fans will remember Johnny’s rapid-fire punches, as though he was constantly picturing the demons who had taken both his parents in such a hideous manner. In the ring, he was always counted on to stay calm, however, always seeming to be calm and collected when punches were thrown. He’d simply duck out of the way, sidestep his persecutor, and return the pain with absolute power and accuracy. Chances are, some say, that his accuracy and ‘no fear’ demeanor was learned at quite an early age when he dodged bullets instead of punches.

On his wedding night, Johnny was found shooting himself in the arm with a needle. His heart stopped and he was declared dead. The demons in this man’s life were many and he chose to take it out on himself and others by constantly bringing himself to death’s door. Strangely enough, Johnny was said to be a seriously fun and happy man, very friendly who always took you into a bear hug and made you feel like you were his best friend in the world.

59-5-2 with 30 knockouts in a professional boxing career that covered 23 years. He won more than 100 fights and earned five New Mexico Golden Gloves titles and two national Golden Gloves championships as an amateur, and he never stopped fighting.

The saddest part about this ending that was foreseen a very long time ago for Johnny, is the fact that death won. What I mean by that is Johnny was a scrapper – he was a man who lived with darkness, sadness, and fear inside his soul but kept getting up, marching on, and proving that he was elite. He was unique and powerful and fought the ‘good fights.’ It’s just too bad that when all was said and done, Johnny had to fight them alone.

This Article is brought to you by: www.befirstinc.com