May 31, 2012 Filed under Business, Sports Posted by Orlando Beach 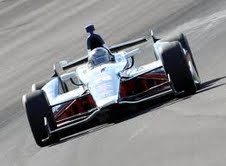 Marco Andretti – nothing new there when it comes to a stellar driver who has trophies lining his bookshelves at home. He was confident going into the race. Shocker! Come on, the guy had one of the fastest cars consistently throughout the two weeks of preparation for the race.

But he does bring with him one of the more ‘fun’ things that lives in the NASCAR world – “The Andretti Curse.” It is no secret that the amazing Andretti racing family has had horrible luck when it comes to winning the Indy 500. Patriarch and legend, Mario Andretti, won everything, but when it came to the Indy, he only brought that sucker home once in 1969. It is a legend that because he received a kiss in his victory lane from car owner, Andy Granatelli, Mario never managed to win the great race for a second time in his many, many attempts from 1970 to his retirement in 1994.

With a cumulative total of 67 starts as drivers, his sons Michael and Jeff, nephew John, and grandson, Marco, all followed in the footsteps of Mario by winning the Indy 500 Rookie of the Year Award but never have managed to win the actual race. In fact, the words: “Mario is slowing down” have become famous in the Indy world.

There was absolutely no change to this curse yesterday… Marco found the lead very quickly with his fast car after the green flag dropped, and he kept that lead for the whole first half of the race (owning a race-high 59 laps.) It was at the midpoint of the race when a caution flag was flown because of Ana Beatriz’s crash that occurred just a few laps after Andretti had made a pit stop. His team then called him back to the pits and that was the last Marco would ever see of the lead.

With twelve laps to go, Marco was actually racing for the 8th place spot when he made a move to the inside of Turn 1. There, his left-side tires got under the white line, sending his car crashing into the outside wall – the race was over and the ‘Andretti Curse’ remains alive and well.

Marco, as all could hear from his in-car radio, was more than unhappy when he was recalled to the pit after the yellow flag, and boy did he take it out on his crew.

It was almost a repeat of 1992, when Michael Andretti’s fuel pressure disintegrated while he was in the lead with only eleven laps to go. Michael led 160 of the 189 laps, but the win never came. The year before, he’d led for 97 laps and finished second.

In 1987, Mario dominated the race by leading 170 laps. That time it was ignition issues that sidelined him.

In 2006, Marco faced the curse when, after being behind all day, he was suddenly at the front of the pack when the white flag waved. Hornish sling-shotted around Andretti as the two cars came out of Turn 4 on the final lap and crossed the finish line first. A sad, sad day as the Andretti angels wept – seeing how close Marco had come to breaking the curse.

Yesterday was the 29th DNF for the Andretti clan, as Franchitti won for the third time. Of course, most people will say he only won because the Japanese driver, Sato, went for the lead going into the first turn, pulled even with Franchitti, and ended up sending his own car into the outside wall. Sato’s car barely missed taking Franchitti with him, as Franchitti became the 10th driver to win at least three Indy 500s in a career.

It was his own teammate, Scott Dixon, who came in right behind him. And another of his teammates who came in third. And the win was actually given ‘in tribute’ to Dan Wheldon.

The three teammates celebrated their 1-2-3 sweep that honored D-Dub, the man who won the race a year ago but was killed in an October crash in the IndyCar season finale. As Wheldon’s three friends lined up with six laps remaining, it seemed to fans as if Wheldon’s angel was most assuredly routing for them.

Second place driver, Dixon, said, “I think a lot of us that were close to Dan, you know, you wanted it that little bit more. I guess maybe in the back of your mind, you figured he would probably help you out today, too. I think in that situation, seeing how it lined up with the top three, three of Dan’s friends, it was a tough one.’’

But, again, it was actually Sato’s race for the taking, and he just couldn’t pull it off.

The whole day honored Wheldon, with his whole family there. Car owner, Bryan Herta, began the day by driving a single parade lap around Indianapolis Motor Speedway in the car Wheldon drove to victory last year. Fans were supplied white sunglasses to wear on laps 26 and 98, marking the car numbers Wheldon used in his two wins.

It was also actually quite a calm, peaceful race to watch. Until that last lap, when Sato made his move for the win, the race was uneventful, as if Wheldon was simply lining up his friends back to back for the easy win.

The only multi-car accident came when a spin by Mike Conway took Will Power along for the ride – a driver who is the series points leader and winner of the last three races this season. Conway broke his front wing when he hit one of his crew members on pit road, careened into the outside wall and had his car tilt on its side before coming to a rest.

Marco Andretti actually said the race was his to lose, and he was most likely right, seeing as that he had it in his back pocket until his crew seriously unraveled his ‘game plan’ and his patience with their adjustments.

Marco is fine from his crash, although he commented that it, “definitely rang my bell.’’ But even the fans were primed for the race to be won by a Chevrolet driver for either Andretti Autosport or Penske Racing (they won the first four races of the season and swept the front two rows in qualifying.) But it was three Hondas that were seen fighting for their first win of the season.

It will only take one more win for Franchitti to move into seventh place in the record books. The names ahead of him? The Unser’s, Foyt and, yes, two Andrettis.

See that? Even with a curse this family will forever be the pinnacle of racing success. Now all Marco has to do is get that Indy 500 win to get that monkey off the Andretti’s back once and for all. …Maybe next year.

This moment in sports is brought to you by: www.befirstinc.com