May 13, 2012 Filed under Community Events, Lifestyle Posted by Tom Ski

Penn Yan, NY, USA — May 11, 2012 –  Sassy Scrubs, a United States based manufacturer and online retailer of medical uniform scrubs, has partnered with Ripley’s Aquarium in Myrtle Beach, South Carolina, to bring a touch of nostalgia and style to a new Dinosaur exhibit. 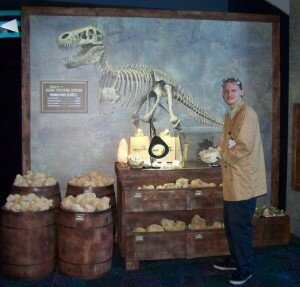 Sassy Scrubs’ custom fossil-themed lab coats are currently being shown off at Ripley’s Aquarium by their Geode Cracking Specialists. Ripley’s Aquarium is a subsidiary of Ripley’s Entertainment, known for attractions such as Ripley’s Believe It or Not, Ripley’s Haunted Adventures, Ripley’s Moving Theatre, and Ripley’s Mirror Maze.

Ripley’s new Dinosaur exhibit “Dinosaurs – When Giants Ruled ”, which is a limited engagement at the Aquarium until October 1, 2012, features a Geode Center.  Here, visitors can have their very own geode rock split open right before their eyes.  Ripley’s Geode Cracking ‘specialists’, who will remain a permanent feature of the Aquarium, are decked out in custom lab coats made from the fabric “T-Rex Fossils”, which were made especially for this event by Sassy Scrubs.

Ripley’s Aquarium Director of Retail, Jon Mula, found Sassy Scrubs online while searching for dinosaur related lab coats.  Jon was very excited to have found a company that could make such appropriate lab coats, and in the time frame he was working with.  “Sassy Scrubs really came through for us when we needed a special lab coat to go with the theme of our new business here at Ripley’s Aquarium in Myrtle Beach!” states Jon Mula.

The Penn Yan, New York scrub manufacturer and internet retailer offers its products through an online store and sells to a broad international audience of medical, dental, veterinary and food service customers, as well as to Hollywood costume departments, museums, and much more.  Sassy Scrubs Marketing & IT Manager, Jody Earle worked directly with Ripley’s Aquarium to be sure they received exactly what they were looking for.

Earle states “We were truly honored to be a part of this exciting time for Ripley’s Aquarium.  When a customer needs something outside of the ordinary scrubs, our company is proud to offer products that help to fill a niche need.  We’ve had the pleasure of working with costume designers, Hollywood directors, comedians, museum curators, and now, the staff at Ripley’s.  It has been a very exciting project for us to work on.  I mean, where else could you find a fossil themed lab coat, other than at Sassy Scrubs?  We look forward to the possibility of Ripley’s new dinosaur exhibit taking off in popularity and being featured at their other facilities, so that we have the opportunity to work with them again soon.  We wish Ripley’s the best of luck in their newest venture.”