The Yankees Are Back!

The Yankees Are Back!

A Little Fun and a Beautiful Tribute

The New York Yankees can always be counted on to score headlines when it comes to the opening days of the baseball season – and this year was no different. But it was the tribute to the ‘best of the best’ who literally changed the game of baseball as we know it, where the Yankees hit on all cylinders!

Rachel Robinson, Jackie’s widow, and her daughter, Sharon, played a huge part in the Yankees’ pre-game festivities for Jackie Robinson Day. It was the third consecutive year they have been at the Stadium for the day that was explicitly set aside to honor Robinson – his work, his power, and his ability to break through the sport’s color barrier sixty-five years ago.

Just to be fair, the Yankees were not the only ones who spoke about or gave tributes to this phenomenal man.

LaTroy Hawkins – the Angels pitcher playing in Yankee Stadium on Sunday – said, “Without Jackie, I wouldn’t be in front of you.”

It was Hawkins, Hall of Famer Reggie Jackson, and several former players, who joined Sharon Robinson at a youth clinic in a park where the old Yankee Stadium stood. Many boys and girls attended from the “Reviving Baseball in Inner Cities” program located in Harlem to eagerly show off their gloves and jerseys for two-time All-Star, Harold Reynolds.

From Dodger Stadium to Fenway Park, Major League Baseball honored Robinson and his legacy on Sunday. There were video tributes and on-field celebrations everywhere! Players, managers, coaches and umpires all wore No. 42 on Jackie Robinson Day commemorating that amazing moment in history when Jackie first stepped on the field with the Brooklyn Dodgers in 1947. There were even markers played on each base noting the occasion.

And the pregame tribute at Yankee Stadium on Sunday night was truly beautiful. Stars from Derek Jeter to Robinson Cano (who is actually named for the baseball icon) hugged the Robinson family as they gathered behind home plate, joined by three Tuskegee Airmen.

Yankees center fielder, Curtis Granderson, wore customized spikes with the Jackie Robinson Day logo on the back and No. 42 on the tongue, and spoke proudly of this 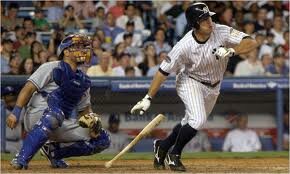 incredible man. “He opened up doors for everybody. I think that’s the one thing he would be proud of. You just look at the diversity, all of which started with Jackie Robinson 65 years ago.”

Mariano Rivera, Granderson’s teammate, is the only active player still wearing No. 42. The number was retired by Major League Baseball fifteen years ago on the 50th anniversary celebration of Robinson’s baseball debut.

Hawkins (the Angels’ pitcher) did note the dwindling percentage of black players in the big leagues; there were only 8.5 percent on opening day in 2011, although there were twice as many in 1990.

Hawkins also took the time to thank his granddad for always leading him down the baseball path instead of basketball, and encouraged other parents to do the same. He also said colleges could help by offering four-year baseball scholarships in order to bring back the numbers.
Another Angel, right fielder Torii Hunter, was one of the first players (along with Ken Griffey, Jr.) to voluntarily wear Robinson’s No. 42 jersey on April 15th, long before it was instituted league-wide. Hunter sees Robinson’s legacy whenever he looks at the Angels’ clubhouse.

“On and off the field, all races, we all come together,’’ Hunter said. “We hang out. We look out for each other. We’re like brothers. Jackie Robinson brought together a lot of people, and now we’re showing love for every race that’s out there.’’

He also went on to talk about Magic Johnson, and how he is the main ‘media’ part of a group of businessmen about to purchase the L.A. Dodgers. When the sale is finalized, Johnson will be the first African-American to own part of a major league team, and Hunter believes that’s another significant fact in relation to Jackie Robinson’s legacy.

Perhaps Magic’s part ownership of the Dodgers can have an impact on increasing the number of African-American kids pursuing baseball careers. Hunter agreed on this point by saying that, “Having an African-American owner like Magic Johnson, who is already a star and has won championships, and is very much loved in California will help. I think it’s going to change a lot.
On top of everything else, Jackie Robinson would have been proud of the Yankees (but a little solemn for his old team) as Derek Jeter hit a three-run homer in the Yankees 11-5 win over the Angels

The series finale of the Yankees-Angels game was hard-fought, to say the least. The Yankees set a season high for runs, and the offense seemed to come alive with runners in scoring position, as they received impressive homers from Jeter and Raul Ibanez who, in the seventh inning, hit a two-run shot into the deck of suites into right field.

With Jeter, A-Rod, and Mark Teixeira’s combined performance on Sunday, they made their mark and showed their fans that the Yankees would NOT rank among baseball’s worst in any offensive category for long!

The Yankees headlines were not only tributes, wins, and fans cheering! In fact, a few fans were booing on Sunday. Why, you ask? Well, there was a visitor in the stadium on Sunday that, apparently, is not beloved by ALL New Yorker’s.

Everyone’s ‘fav’ backup quarterback, Tim Tebow, was there to witness the Yankees 11-5 win over the Angels. The brand new Jet sat on the third-base side next to the Angels dugout with a Yankees cap on. Oddly enough, when the stadium video board showed Tebow among the fans – cheers were not the only thing he received. In fact, fans present say that the ‘boos’ definitely outweighed the cheers. (Perhaps it was because he was there routing against Angels?). More likely, it’s because he was in GIANTS territory – and a Jet is simply not welcome there! J