April 19, 2012 Filed under Letter to the Editor, Pets / Animals Posted by Ernest

In an email message, PETA asks supporters to stand for replace the use of animals in military trauma training with the superior non-animal training methods available. 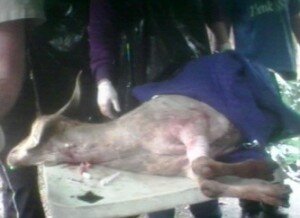 Today, PETA has blown the lid off highly secretive U.S. military training exercises in which more than 10,000 live animals are violently mutilated each year.

As a result of a report from a brave whistleblower, PETA has obtained sickening undercover video footage of a crude training course for members of the U.S. Coast Guard at a remote site in Virginia Beach, Va. Click here to watch the video now.

In the shocking leaked video, instructors working for a military contractor repeatedly break and cut off the limbs of live goats with tree trimmers, stab the animals with scalpels to cause internal injuries, and cut into their abdomens and crudely pull out their organs.

Some of the goats moaned and kicked their legs during the mutilations, which veterinarians who viewed the video say are signs that the goats were not adequately anesthetized and may have even been feeling pain. Later in the day, according to the whistleblower, the goats were shot in the face with pistols and were hacked apart with an ax while still alive.

Seeing this footage sickened me, and as a former Navy hospital corpsman, I was disappointed that our armed forces are still harming animals when superior non-animal training methods exist. In my seven years of active duty, I never harmed any animals during my medical training. And never have I been unprepared to save lives.

The evidence of the superiority of these state-of-the-art simulation methods is so overwhelming that Congress has introduced legislation to phase out the use of animals in military training in favor of non-animal methods.

We now need your help to get this cruelty ended for good!

Please click here to contact U.S. Department of Defense officials and urge them to take immediate action to comply with military regulations and completely replace the use of animals in military trauma training with the superior non-animal training methods available.

Thank you for all that you are doing to help animals!