Red on Red is a Thrill-Ride!

Red on Red is a Thrill-Ride!

This is one novel that will resonate with all fans of thriller, suspense, and stories about the inner-workings of a human mind when it comes to loyalty, belief, and the need to be the absolute ‘best’ in their chosen field.

Although this is a complicated tale, this author was the one who gifted the world with the amazing memoir, “Blue Blood,” and once again challenges the reader by offering up a clear vision of how tough, strong, and relentless one must be if they are living the life as a member of the New York Police Department’s finest.

Nick Meehan is a burn-out on the force. He has literally ‘had it’ in all ways possible—from personal to professional—yet when he’s transferred to another squad and meets up 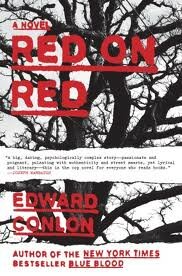 with his new partner, Esposito, a team develops that no one would have thought possible. Esposito is a man who does an admirable job as a policeman, but it’s the rules and regulations where he needs a little work. As the team of Meehan and Esposito begin, they soon find they can only rely on each other as they fall face-first into a vat of crime.

These polar opposites have many mysteries on their plate that begin to unravel on a daily basis. From a serial rapist whose end is nowhere in sight, to a human hanging that occurs in the park; from a gang war that’s brutal and goes far deeper than originally expected, to a young girl who dresses in the uniform of ‘God,’ yet may just be the victim of violent abuse. Esposito and Meehan meet up with every dark and sinister human being that exists on our planet.

Although the lies, deceit, trickery, and pain are beyond interesting and will hold every reader’s attention, it is the relationship that drives this novel home. The author, having worked as a detective on the New York City Police force, calls on his own real-life experiences to create this mesmerizing novel, so it can be safely said that there has never been a more truthful or poignant police drama written. The interweaving of characters makes this a must-read, and a very definite ‘keeper.’