What does it really mean to a sport when the most famous of all its competitions in their world has to begin on a Monday? Everyone on the planet can tell you how incredibly 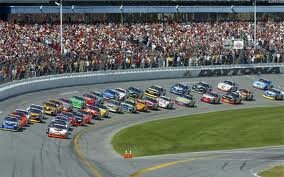 icky it is to even wake up on a Monday and go to work, let alone actually watching a much-beloved race on that horrific day. Let me tell you – there are slews of wannabe witches, genies, and overly upset people who live and die by NASCAR, and are already finding a way to speak to ‘whoever’ is listening in order to not have the rest of the races in the ‘trouble’ that Daytona now finds itself in.

NASCAR has found themselves on the beach at Daytona forever, but it seems that for the very first time in its history, today – Monday – will be the day for everyone to watch it. You can actually almost feel a bit of a chill on the skin as you wonder if this foreshadows the races to come.

After fifty-four years, the Daytona 500 was simply canceled after extremely heavy rain saturated the  Daytona International Speedway. You have to give credit to those NASCAR officials who spent a great deal of their time and energy staring at that horrendous rain for more than four hours, while waiting for a break that never came before postponing. When it came upon the hour of five p.m. and yet another storm cell was going to work its way through, they literally had no choice but to pack it in and try for today. I say try…because there’s a reason.

The drivers seemed to be extremely upset by this. In fact, after speaking with a great many of them they seem to be slightly panicked, frustrated, or even a bit less hopeful than they were before. Perhaps it is a bad omen for them to race on a Monday, who knows?  It was pole-sitter, Carl Edwards, who tried to explain the feelings surrounding him, by saying: “This is one of the toughest things for us drivers. It’s now who can really stay focused. That’s not just the drivers, that’s the pit crews, the crew chiefs, everyone, the officials. But I think we’ll be just fine.”

Perhaps it is the amount of adrenaline that is called forth in order to focus completely on Daytona that really disturbs the drivers, especially considering the fact that Monday’s forecast simply calls for more rain. Oddly enough, the officials have said that they are prepared to wait throughout the day and into the night in order to avoid a Tuesday race, seeing as that putting it off once again puts extra strain on the teams that must arrive in Phoenix for next week’s race.

Yes, Mother Nature has certainly gotten in the way before at Daytona. Eight previous ‘500s’ have endured rain delays, with the latest occurring in 2009. But never have storms forced NASCAR’s premier event to actually be moved.

Drivers were seen heading back to their motor homes to relax as they eyed the sky and hoped for the best Former Daytona 500 winners, Jamie McMurray and Trevor Bayne tried to get rid of their extra time by doing in-studio interviews. They all certainly knew that the race fans were disappointed and that a lot of people at home were watching their televisions knowing that they would be at work the following day if this did not happen.

The 2010 race actually had its own delays – more than two hours of them – as NASCAR stopped the race twice in an attempt to fix a pothole in the surface of the track. Jamie McMurray was the one who held off the mystifying Dale Earnhardt, Jr. in order to come up with the win that day. But this past Sunday, drivers didn’t even get in their cars to attempt to begin.  In fact, they were probably all in their motor homes last night seeing Meryl Streep take home her umpteenth Oscar.

Yes, there is far more of a downside to this than just a unhappy drivers with nothing to do. It is really NASCAR who must now deal with the fact that moving its biggest race causes ratings and attendance to fall – very, very short of what the series expected or needs. Fans, quiet obviously, also have an itinerary of complaints.

Joie Chitwood, Daytona President, did offer his understanding to fans, knowing they were frustrated about the change, especially considering that NASCAR had already moved the race once in order to not coincide with the Super Bowl and their always off-the-chart ratings.

There are certainly true ‘events’ that people wish to see at this Daytona 500, included the fact that it is the first of ten scheduled ‘Sprint Cup Series’ events that Danica Patrick will be a part of, since leaving IndyCar behind in order to move to NASCAR permanently. In addition, three-time NASCAR champion, Tony Stewart, needs to have something truly special occur this year because he is attempting with all his might to end his 0-for-13 losing streak in the Daytona 500. Stewart has had seventeen victories at Daytona – but not the 500 – leaving him ranked at second on the all-time list behind the late Dale Earnhardt and his thirty-four wins.

Stewart is most widely known for the three titles that he scored in NASCAR’s ‘top of the line’ series. The three-time Sprint Cup Series champion received his very first crown in 2002 when he beat veteran racer, Mark Martin. He went on to win his second in 2005 when Greg Biffle was the one he left by the side of the road. And the third title, which was earned in 2011, came to Stewart after winning the season finale at Homestead Speedway.

Stewart is certainly no stranger to championships, making a name of himself in the United States Auto Club (USAC) winning four, including the first unprecedented win of USAC’s “Triple Crown.” But certainly do not count out the always amazing Earnhardt, Jr.. Yes, the 2004 Daytona 500 champion has a 129-race losing streak that is riding on his shoulders like the Titanic. However, let’s be very honest with ourselves. The name Earnhardt is to racing as Jordan is to basketball and Montana is to the NFL. (For that matter, what Streep is to the Oscar), so it will ever come as a great big surprise to see that name once again up in lights.

So pray for sun and a kind boss who will extend the lunch hour!