February 26, 2012 Filed under The Literary Nook Posted by Amy Lignor

This truly enjoyable series is really a little-known ‘gift’ to the literary world, that truly deserves to be way better known in this reviewer’s opinion. 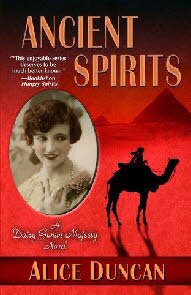 Daisy Gumm Majesty is a sparkling wit, charming, intelligent, and truly devoted to her husband and her friends.  Unfortunately, in this new novel, her husband Billy has passed away.  He eventually just couldn’t take it anymore.  Ever since WWI ended, his life was turned upside-down.  He lived with pain, and felt abysmal that his own young wife had to bring in the money because he was unable to do so after getting home from the War. Daisy is so strong; she actually is a fake-psychic, but many believe her and pay her for her supposed ‘gifts.’  Her most lucrative client, Mrs. Pinkerton, is in need of Daisy’s help.  But Daisy hasn’t done much of anything since Billy died.  She finds herself in a deep depression – unable to eat – and unable to find her smile, now that her beloved is gone.

But, she does find it in her heart to help Mrs. Pinkerton, and goes to her house to do a reading. Now Daisy is simply not in the mood to be kind at the present time, and lays down the law where Mrs. Pinkerton’s selfish daughter is concerned – a child who needs a comeuppance and needs one now.

She is also a bit tired, as always, of Sam Rotondo – a cop who seems to always be a bit brusque and likes to roll his eyes when Daisy comes into the room because he knows that her “powers” are fake.  But in this tale, Sam seems to be lightening up just a tad, and Daisy soon finds out why.

Because of her depression, her best fiend – Harold Kincaid (Mrs. Pinkerton’s son) – decides to take her to Egypt; a getaway across the globe to hopefully make Daisy want to live her life to the fullest once again.  But when they run into some criminals and a kidnapping occurs that must be solved, Daisy Gumm Majesty soon finds herself ‘waking’ from her broken heart to save her friends.

This is, yet again, another wonderful mystery full of humor, love and some of the greatest characters to be given to literature in quite some time.  Enjoy! (GALE Cengage; ISBN: 978-1-4328-2570-6)