WE ARE THE TIDE DEBUTS AT #56 ON BILLBOARD 200,
FEATURED ON NPR MUSIC’S “FIRST LISTEN” SERIES

“We Are The Tide blooms agreeably from start to finish…these guys make remarkably sturdy, gorgeous songs.”—NPR

Portland-based band Blind Pilot will continue to tour this winter in celebration of their sophomore album, We Are The Tide (Expunged Records). See reverse for complete details. Released to widespread acclaim, the new album debuted at #56 on the Billboard “Top 200” chart, #22 on the “Overall Digital Albums” chart and was featured in NPR Music’s “First Listen” series. Additional upcoming appearances include a performance today on KCRW’s  “Morning Becomes Eclectic” and a January 6 booking on the “Late Show with David Letterman.” 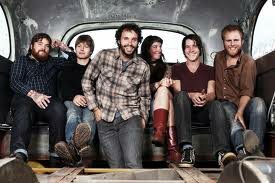 We Are The Tide follows the band’s grassroots break-out debut, 3 Rounds and a Sound, which has sold over 60,000 units to date and was featured in NPR’s “Best Music of 2008” roundup. Recorded at Type Foundry in Portland, OR during the spring of 2011, the new album was produced by the band and Skyler Norwood and mixed by Tucker Martine (The Decemberists, My Morning Jacket). Of making the album, founding member Israel Nebeker comments, “We had a good idea of what we wanted the album to sound like and what all the instrumentation would be. There was excitement and anticipation but that came with a fair amount of challenges for me as the songwriter, since I had never written in that atmosphere before. Fortunately, the creative process has a way of obliterating your expectations, and while we had a plan for each song, eventually the songs told us the way they needed to be. We learned a whole lot in the process and when I listen to the album now, I hear all these good surprises we didn’t know were going to be on there.” Co-founding member Ryan Dobrowski goes on to say, “I love the first record, but it was really exciting to work on arrangements with the whole band in mind. There are some songs on We Are The Tide that sound like an extension of 3 Rounds and a Sound, but a good number that are exploring new areas.”