Arriving just in time for the festive holiday season, America’s favorite observer and philosopher will pay a visit to St. Augustine to share his wit and wisdom. “Happy Holidays from Mark Twain” with Robert Gill will be making its debut at the Raintree Restaurant on Sundays, December 4, 11, & 18 in a special limited run that you won’t want to miss! 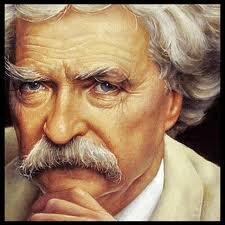 This spellbinding production will include the majority of the sold-out Limelight Theatre show this past January, with a generous assortment of Christmas confections sprinkled in as well. In recent years, Robert has brought several uniquely themed Twain shows to the Ross Theatre at Jacksonville University, the Gillespie Museum of Minerals at Stetson University, the Airstream Convention in St. Augustine, and Landrum Middle School in Ponte Vedra, among many others.

The distinguished Twain scholar, Dr. Cindy Lovell, Executive Director of  The Mark Twain Boyhood Home and Museum in Hannibal, Missouri, and Mr. Gill’s collaborator, singles his portrayal out as, “the other Mark Twain…”. And  features editor Kameron Jackson of the Navigator in Jacksonville called the performance, “…very passionate and emotionally driven…”. This production promises to be the hit of the holiday season, in a deluxe dinner theatre setting! Make your reservations today!

Tickets are $39.95 per person all inclusive, with adult beverages also served separately. Dinner will be served at the Raintree Restaurant at 6:00 PM (suggested arrival time is 5:30 PM) with the show to follow at 7:00 PM. Ticketholders take note that the dinner and show are in the upstairs dining room. Tickets can be purchased in advance at the Raintree Restaurant from 1:00 PM on, seven days a week, or please call 904-824-7211 for reservations.