“Sixteen in July, sixteen in July with summer on my left, and no one to my right.” Go look up the song immediately; the words don’t do the melody the justice. I got off my night job about the time the sun was coming up and the tune just lingered, no words yet, went to sleep still trying to figure it out, and woke up in the afternoon of the 16th of July still trying to figure out what the song was. It wasn’t until asking the friends I planned on going to the show with that it hit me. The Avett Brothers. One of the sweetest, gentle summer songs I have ever heard, and how appropriate a date, serendipity had outlined the evening of their slow and fast tunes, their sadness and their joy, the brothers brought it all to the table that night at the St. Augustine Amphitheater.

Scott and Seth Avett anchor the band alternating singing, playing guitar and Banjo respectively. Their simultaneously nostalgic and inspirational ‘now-ness’ tunes range from quiet head-on-the-pillow-eyes-open sorrow, all the way to an electric pop-infused energy, like the foam shooting off the can of beer. The brothers from some songs play bass drum and high hats on foot pedals while playing strings upstairs. The standard Bluegrass set up would be standup bass, mandolin, banjo, guitar, and maybe a slide guitar, the percussion being shared between bass and mando. The Avett Brothers surely like to do things unconventionally. Substituting slide for a cello, wonderfully showing off the talent of Joe Kwon, who keeps up with the energy, cello strapped in front of him to kick and dance while he plays, The Stand up bass showing off Bob Crawford, the former lead guitarist of the brothers’ original band, Nemo. This would certainly be an entertainment of lows and highs, inspiration, poetry, and above all hope. 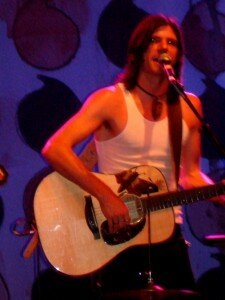 I got an early and started drinking to getting ready for the concert and by the time we made it to the campsite to drop off the after show provisions we had already missed the opening band. Usually a minor tragedy but our focus was intent on the Avett Brothers and their trip to the Zion of the American dream. If darker musicians like Frank Sinatra and Tom Waits followed Jack Kerouac’s example of the American dream, traveling, drinking, smoking all manner of things, and finding through indulgence and recklessness the drunken grin of the American dream, The Avett Brothers show a hopeful light at the end of the tunnel that American music has left us in. Even their saddest tunes, such as “Shame” leave us somehow with the feeling that we are not alone in our melancholy. The song “Tear Down the House” speaks introspectively to the sadness inherit in today’s aftermath of the suburbs, another failed American dream, but still puts an arm around your shoulder saying, “I remember crying over you, and I don’t mean like a couple of tears and I’m blue, I’m talkin about collapsing and screaming at the moon, but I’m a better man for having gone through it”.

The show alternated between this soft intimacy between the brothers and the audience, and an explosion of dance and laughter, Scott starts a guitar rhythm dancing with this knees like a reincarnated indie Elvis Long black hair dancing on his head as he smiles and jumps into chorus after chorus, not compromising intimacy for volume he eggs on the audience to join in. Numerous times members of the band step out of their stage light just to dance with and fall in love with the audience as we do the same with them from the floor level. “Distraction #74,” a song about leaving a lover, comes in with a banjo lick and beat and vocals all coming from Seth that is more reminiscent of the songs Dixie than any sort of mourning, moving the audience it dance and jump and smile with a brightness you can only feel after the bell rings in your last class, on the last day of school. They came back on stage after the lights went out for an encore and carried with joy with them for the ironically named song, “Die Die Die,” their vocal harmonies lifting up those of the audience and carrying them all far past the amphitheater, we all felt like family in that moment. 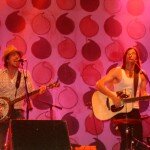 If you missed this band, shame on you, to redeem yourself, lookup an old video of them playing “Laundry Room” in Norfolk, it pretty much covers the entire gamut of their sound, gives a taste of their live performances, and leaves you with a message permeating many of their songs, “I am a breathing time machine, I will take you all for a ride”~