Best known as “Lacey Underall” in CADDYSHACK, and “Yori” in TRON, Cindy Morgan was born Cynthia Ann Cichorski on September 29 in Chicago, Ill, not far from Wrigley field. The daughter of a Polish factory worker and German mother, Cindy survived 12 years of Catholic school and was the first in her family to attend college.

While studying communications at Northern Illinois University, Cindy spun records on the radio. A commercial station in town wanted her to report the news for them as well, and so a slight deception was needed. She used the name Cindy Morgan, taken from a story Cindy read about Morgan le Fay when she was twelve years old. 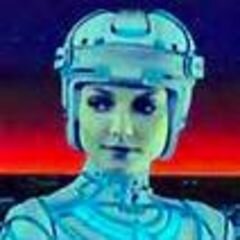 After graduation, Cindy gave all the latest meteorological news on a TV station in Rockford, Ill. She also kept her hand in radio by working the graveyard shift at a local rock station. Then she returned to Chicago and deejayed on WSDM (now WLUP). During a labor dispute at the station, she literally quit on the air and walked out with a record still spinning on the turntable.

She found employment at auto shows for Fiat, which took her to both coasts. Cindy moved to Los Angeles in 1978, and became the Irish Spring girl. While she did TV commercials, she studied acting, and was rewarded with her first screen role in CADDYSHACK, playing the role of Lacey Underall, an over-amorous ingenue.

Disney made film history with TRON, the first computer-generated film. Cindy played two characters: Lora, a compute programmer in the “real” world, and Yori, her alter-ego in the film’s computer generated flights of imagination.

She’s now finishing her first book, a story about how a nice Catholic girl became Lacey Underall in CADDYSHACK.