The Nina is a replica of the ship on which Columbus sailed across the Atlantic on his three voyages of discovery to the new world beginning in 1492. Columbus sailed the tiny ship over 25,000 miles. That ship was last heard of in 1501, but the new Nina has a different mission. We are a floating museum, and we visit ports all over the Western Hemisphere.

BUILDING OF THE REPLICA

In 1986, the Columbus Foundation was formed in the British Virgin Islands to raise money to build the three ships that Christopher Columbus used in his encounter with the New World. With the 500th Anniversary only six years away, it seemed like an opportune time to encourage interest in such a project. What was not known at the time that the quincentennial would turn out to be such a non-event. Some people saw nothing to celebrate. Instead, they thought that it should be an occasion to protest while pursuing modern political agendas.

The Columbus Foundation wasn`t looking for heroes or villains. Theirs was a search for information. There were no authentic pictures of the Pinta, Nina or the Santa Maria,and all of the so-called models, replicas, or reproductions that had been built in the past merely represented what some artist, architect, archaeologist or model ship builder thought what they ought to have looked like. 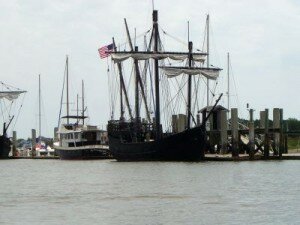 The next two years were spent in research. During that time it became evident that due to money and time constraints it would be possible to build only one replica. It was decided that the Nina would be built. The original Santa Maria ran aground in Hispaniola and sank on the first voyage. She was a nao, or freighter and was built in Galicia. She became the flagship because she was the largest of the fleet but Columbus disliked her for her dull sailing qualities, and when she sank he recorded in his journal she was very heavy heavy and not suitable for the business of discovery. The least was known about the Pinta, and after the first voyage she disappeared from history without a trace. The Nina, like the Pinta, was a caravel, which was a common trading vessel in use during the Age of Discovery.

Caravels were also used as cargo carriers, warships, patrol boats, and even corsairs (pirate ships). Their advantages were speed, a shallow draught, and manoeuvrability, plus the fact that they were good sailing ships. The Nina, which is rigged as a Caravela Redonda, has square sails on the main and foremast for sailing downwind, and lateen (triangular) sails on the mizzen masts.

Caravels have always been linked with Portuguese and Spanish explorations and explorers. They were used to chart the Coast of Africa to the Cape of Good Hope by Bartholomew Diaz; they took part in all four of Columbus voyages; they were used by Vasco de Gama in 1502; in 1519, the caravel Santiago accompanied Magellan`s expedition. The Caravel heydey lasted almost a hundred years from the early 1400`s to the 1530`s. Once Columbus established transatlantic routes, larger cargo vessels as well as warships were required, which paved the way for the development of the galleon.

Columbus changed the Nina`s rig to a Caravela Redonda before the first voyage. The Nina was Columbus`; favorite. She made the entire first voyage, bringing the Admiral safely home. When Columbus had the pick of the whole Merchant Marine on his second voyage he selected her out of 17 ships as his flagship for an exploratory voyage to Cuba, and purchased a half share in her. After his return she made an unauthorized voyage from Cadiz to Rome, was captured by a pirate off Sardinia, recaptured by her master and crew and returned to Cadiz in time to sail to Hispaniola early in 1498 as advance guard of Columbus third voyage. She was lying in Santo Domingo in 1500, and we last hear of her making a trading voyage to the Pearl Coast in 1501. The Nina logged at least 25,000 miles under Columbus` command.

In 1988, the Columbus Foundation hired John Patrick Sarsfield (Click here for more info on John.), an American engineer, maritime historian, and expert on Portuguese caravels, to design and construct a replica of the Nina. John had lived in Brazil while working in the Peace Corps, and had learned of an archaic ship building process called Mediterranean Whole Moulding. This was a technique used by master ship builders in the 15th Century and likely used to build the original ships. Sarsfield discovered this technique in daily use in shipyards on the coast of Bahia in Brazil. In a sleepy little fishing village called Valenca, Sarsfield slowly gained the confidence of the Valencan shipwrights and they began to share with him the secrets of their techniques. Valenca was chosen as the building site for three reasons: shipwrights were using Mediterranean Whole Moulding in conjunction with mechanically generated geometric progressions known as graminhos, techniques that may be similar or identical to those used by the builders of discovery period ships.

Secondly, shipwrights were using traditional tools, such as axes, adzes, hand saws and chisels, as well as utilizing traditional construction methods; and finally, the tropical forests of Bahia provided a source for the various naturally-shaped timbers necessary to build a large wooden ship.

Ships of this period were not built from a set of plans but from the mental template in the head of the shipwright who based the dimensions of the ship on a set of proportions. Different proportions, varying from region to region were used for different types, however, all were based on the length of the keel.

Several important design details, including such fundamental factors as the number of masts and rigging specifics were clarified by data from recent discoveries of 15th & 16th Century Spanish shipwrecks in the Caribbean.

Tragically, on July 11th, 1990, whilst on a trip to select a main mast for the Nina, John Sarsfield was killed in a traffic accident. His contribution to the project had been enormous, in fact, it was his determination to see his theories develop into reality that made the building of the Nin`a possible.

As the hull was complete, the ship had yet to be rigged. Jonathan Nance, British maritime historian, and one of the main researchers of the project, was asked to finish the ship. John produced a sail plan for the caravel together with numerous drawings of blocks, spars, and other fittings. Although no information directly relating to the design and construction of the Nina exists, specific reference to her rig and gear survives in a document called Libro de Armadas, which was discovered by Eugene Lyon. It indicated that the Nina may have been rigged as a four master. The document also included an inventory of equipment aboard the Nina in 1498 when a new Master Pedro Frances took over the ship. Nances sail-plan represents the Nina as she would have appeared during the eight recorded busy years of her life following her departure from the Canaries in September 1492.

In June of 1990, the project came to the attention of a group of marine archaeological researchers from the privately-funded group Ships of Discovery, based in Corpus Christi, Texas. They spent a week inspecting the project and came away believing that they had seen the making of a true fifteenth century discovery caravel. Their article, published in the January 1991 issue of Archaeology magazine asserts: combining ethnographic survivals with pertinent results of documentary, artistic and archaeological research, Sarsfield`s Nina will likely be the most authentic replica Columbus era ship ever built.

In December of 1991, the Nina left the banks of the Rio Uno in Valenca, Brazil rigged as a four-master. It carried a crew of eleven and arrived in Puntarenas, Costa Rica on January 23rd, 1992 to take part in the film 1492 directed by Ridley Scott and starring Gerard Depardieu. Its voyage of over 4,000 miles represents the first time that a discovery caravel replica has made a successful unescorted open ocean passage of any considerable distance.
The Nina continues to sail to new ports, and also continues to be the only touring maritime museum of its kind. The ship was used for Discovery and that is precisely what it will continue to do, and this is what makes this attraction vessel unique.

Life on board the Nina in 1492 was not for the light hearted. When the Nina left on any of her three voyages to the New World, her cargo hold was full of provisions, water, armaments. There were live animals ranging from horses, cows, pigs, and chickens. The four-legged animals were suspended in slings as the rolling motion of the vessel would have easily broken their legs.

Needless to say, there was little room below decks for the 27 or so crew to sleep or cook. Cooking was done in a fire box located on decks in the bow of the ship. Sleeping was on the deck and was always uncomfortable as the ship was so loaded with cargo, her decks were always awash. A lucky few could sleep on the poop deck or find a coil of rope to sleep on to keep them off the deck a foot or so.

Life on board improved dramatically when the Nina reached the New World. New fruits and vegetables were discovered which helped to eliminate scurvy and most importantly, the Indians slept in hammocks which the Spanish crew immediately used in their travels.

Today life on the Nina is better. We have WWII style pipe berths to sleep on, an icebox which holds 1000 lbs of ice and a small propane stove for cooking. Most importantly, we do not have the smells on board of livestock below decks, and the associated jobs of cleaning the bilges.