Michael Goudeau…Comedian/Juggler and so much more…… on Mar3 2009

by Denise Kaminsky | Print the article | 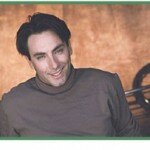 Today I had the opportunity to speak with Las Vegas comedian and juggler Michael Goudeau. Hello Michael where are your originally from?

I’m from Baton Rouge, Louisiana. That’s French for “red stick.” When I was a kid in elementary school we made dioramas of Indians and French trappers standing next to a red stick. In that part of Louisiana the name choices were red stick or mosquito swarm. It was a great place for a kid to grow up. I did a lot of Huck Finn sort of things, spent my time fishing and catching turtles. I was completely absorbed in catching as many “red eared sliders” as I could. At one point I had 108 of them in a baby bassinet.

What was your inspiration to become a comedian and a juggler?

When I was a kid my father gave me a “How to Juggle” book. I already had a unicycle I had bought at a garage sale for $4. I was 15 years old at the time. I was working at a Renaissance Faire in California. At the faire I ran a carnival game booth that we had covered in burlap to make it seem “authentic.” I saw a couple of guys do a comedy and juggling act, people were laughing and giving them money. This was a lot more exciting than turtle hunting. I went home and dug out that juggling book and started practicing. I found a friend who wanted to do a show with me. He and I practiced 4 hours a day for 6 months. We went from zero to doing street shows in San Francisco as fast as we could.

We literally decided we would do a comedy juggling act before we could juggle at all. I was lucky to be near San Francisco which was during the big comedy club boom and I got to see great comedians doing shows including Bobcat Goldthwait and Paula Poundstone.

Watching them perform I learned that juggling wasn’t nearly as cool as being funny. I’ve worked hard to do a funny show that involves juggling rather than just a juggling show. Since then I’ve done more shows there than any other juggler ever and I’ve somehow become the most successful juggler in Las Vegas history.

You are also a Writer/Producer; tell me about the projects that you are currently working on and also some of your past projects?

I got my TV writing break on Penn and Teller’s Sin City Spectacular. It was a weekly variety show on the FX network. Penn and Teller invited a few of their variety artist friends to come in and write for a week. At the end of my week I refused to go home. I was having a blast writing jokes and laughing. When my week was over I still came in every day. After a few days they quit trying to chase me off and offered me a full time job on the show. I worked as a writer and then did audience warm up during the taping of the shows. TV taping is always a pretty slow business but one night there were a lot of technical problems and so I had to try to be entertaining while they fixed the equipment. I was on stage for about 8 hours. I only had about 45 minutes of material. I did everything I could think of. At one point I got the audience to sing “Take Me Out to the Ballgame.” It was a long night.

Thanks to “Sin City Spectacular” a lot of things I never could have imagined became my life. I got the chance to write jokes for my childhood heroes, the Smother’s Brothers. I met “Slash.” I wrote a comedy bit for Lyle Lovett that turned out to be amazing. I met and worked with dozens of famous people who were talented, kind and were happy to work on a bit with a new writer.

Since then I’ve been a writer and executive producer for Penn and Teller’s Showtime series “Penn & Teller: BS!” We just finished taping season 7. We’re now the longest running show in Showtime history. It’s a great job too. I get to write about things that matter to me. It’s a show examining the BS of everyday life. We get to be funny and serious while telling the truth as we see it. There’s an awful lot of BS out there. I hope the show runs forever.

Where are you presently performing?

I’m currently at the Monte Carlo Resort in Las Vegas as a featured act in the “Lance Burton Master Magician” show. I’ve been in the show since 1991. I also do a couple of corporate events and trade shows a month to keep me nervous. Its fun to do shows in other situations with new scripts. It keeps me sharp and working hard. I’m hired to write shows to match products or companies and tie them into juggling. If you’ve got a booth at a trade show and a product that doesn’t generate a lot of excitement on its own, I can do a show about it. People laugh and they learn the name of the product and what it does. It works surprisingly well. I’ve gotten pretty adept at fitting juggling metaphors to a huge variety of products from computer software to big metal storage boxes.

Are you available for bookings?

I am available for some shows. Jay Leno gave me some advice a long time ago. It was pretty simple. “If you do a show, you get a check. So do shows.” I’ve tried to follow that. Anyone can get in touch with me at www.mikegoudeau.com. There are clips from my juggling show there and links to some of the dumb stuff I’ve done. I was the lead in a Barry Manilow video and that link is there. I think there’s also a link to my chicken gumbo recipe.

What do you do in your spare time, if any?

I’ve got two kids so my spare time is generally spoken for. We’ve got basketball, ice skating lessons, and birthday parties every week of the year. You do the math. Two young kids in school, they’re each in a class with 19 other kids, that’s 38 parties from just the kids in their classes. They’ve got other friends too. We get enough calories from cake and pizza every weekend that we don’t buy groceries. On the up side, you should see how good we are at the games at Chuck E. Cheese. We have enough of their prize tickets to get a Toyota Sienna.

Thanks so much for the fantastic interview and keep up the great work.

Hey Look Mexico, You’re Looking Good! Did You Do Something with Your Hair?

At the Harvest of Hope Festival this year at the St. Johns County Fairgrounds I had the pleasure of interviewing ...
Read on →


The Flaming Lips in St. Augustine

The Flaming Lips will perform at the St. Augustine Amphitheatre Friday May 14th WHEN: ...
Read on →

NIGHT OWL CINEMA RETURNS IN ITS 3RD SEASON TO THE ST. AUGUSTINE AMPHITHEATRE The Saint Augustine Amphitheatre is proud to ...
Read on →

By Date By Topic